The word megalith comes from the ancient Greek "megas" tall, and "lithos" stone. They have or many great size stones, erected or handraised by the prehistoric men, without mortar or ciment to fix the stcture.
There are most of the time menhirs, dolmens and covored alleys.
Some rocky chaos can flush the ground with more or less rounded shapes due to erosion : we find them under the name of mammoth stones, for example in Moustoir-Ac on our territory.

Today, many different theories exist and face each other about their function, but most of the scientists acknowledge them a multiple role, social, cultural (religious and funerary), astonomical, artistical... 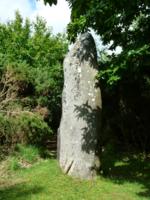 The word "menhir" is built from the Breton "maen" stone, and "hir" long. A menhir is an erected stone vertically planted.
No one can really say what they were used to… however some of these uses may have been for fecundity rites (typical example in front of the Church of Buléon).
They also might have been used for druidic sacrificies rites, as markers or early calendars. They are sometimes engraved with abstract forms (line, spiral) or with objects' images like axes. The great Kermarquer menhir in Moustoir-Ac shows sticks visible in low-angled light, on two of its faces.
In the Middle Ages, some menhir will be christianised with some cross addition or religious engravings, like the menhir in front of the Moustoir chapel in Saint-Jean-Brévelay. The word is built from the Breton "t(d)aol" (linked to the Latin word tabula) table, and "men" stone.
A dolmen is a prehistoric megalithic building with one many big covering slabs (tables) lying on standing stones which are its legs (the orthostasts). Everything used to be recovered, protected and marked with a pile of stones and ground named tumulus.
The dolmen are most of the time thought as funeral monument which hve sheltered reusable collective burials : it could explain the discovering of hundreds people human bones and furniture from different periods in some dolmens.
Further more, many archeological Discovery (offering, altar) let think that these funeral monuments might have had a religious function.
Their architecture sometimes has an access corridor built with slabs or dry stones.
You will see them in Moustoir-Ac, St Jean Brévelay, la Chapelle-Neuve... 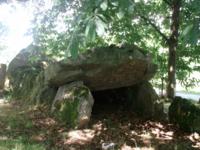 In some extremely long dolmens, the room and the corridor have more or less the same width and merge together. They are covered with many horizontal tables and are called "covered alleys". Most of the time they have the same high all along. The covered alleys are Younger than the corridor dolmens.
We have a nice example in Bignan, the Lescadec covered alley at the locality St Just.

No so many left on our territory...

Cairn is a Celtic word ("carn" in modern Breton) referring to a pile of stones made by men. They were built in many purpose : marked a path, identify a mountain, locate an event to commermorate, recover a funeral place… They can have many forms and very different size. Very present in Scotland, there are some in Brittany, most of them built to recover graves. The most impressive cairn is the one of Barnenez, the oldest megalithic monument known (5th century before Christ). On our territory, smaller, is the dolmen of La Milgourdy in Plumelec

A tumulus, Latin word meaning Knoll, refers to an artificial elevation, round or not, recovering a grave. The tumulus is built with ground, sometimes melted with stones, whereas the cairn is only built with stones. Nowadays, they are really rare and have disapeared due to men and erosion… To see, in Bignan the Kergonfalz dolmen nested in its 30 meters diameter tumulus.

The cromlech, are prehistoric megalithic monuments made up of an alignment of vertical monoliths (menhirs) making a standing stones enclosure most of the time round. They are said here only in a concern of completeness because we Don't have any around our territory. The most famous being the one of Stonehenge in England… The word comes from ancient Gaellic : "crwm" curved, and "llech" flat stone, and mean "flat stone (placed in) curve". 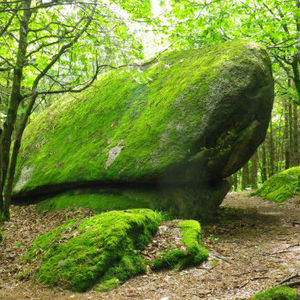