Official site of the Tourist Office of Centre Morbihan
Homepage  -  Discover  -  Chapels, calvaries and their secrets 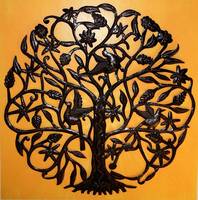 Next to the church is the chapel Notre Dame du Plasker, rebuilt in the 16th century to relieve the parish church which had become too small. It was also used under the old regime for meetings of the corporations (butchers, tanners and carpenters). During the Revolution, the chapel was transformed into a material depot and was used for some time as a decadaire temple. Throughout the 19th century, and even beyond, the chapel became the meeting place of the Marian Congregation of Young Girls.
At the beginning of the 20th century, the municipality planned to raze the chapel to the ground, but it ran up against the Fine Arts Administration, which repaired it and obtained, in 1930, the inscription on the Supplementary Inventory of Historic Monuments.

The inside is interesting. There is a polychrome altarpiece from the 17th century and a stone altar from the same period. The Virgin with the Crowned Child (16th century) is surrounded by flowers, St. Joseph and St. Mark, recognizable by his lion. The tabernacle dates from the 19th century. The furniture is harmonious.

On the back wall, there are several statues of Saint Helena, Saint Joseph, Saint Crépin, the patron saint of shoemakers and Saint Roch with his dog. 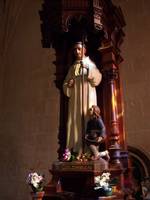 Colomban de Luxeuil, the most famous of the Colomban Saints (°543 in Navan - † 21 November 615 in Bobbio near Piacenza, Italy) is an Irish monk who evangelized the rural populations of Gaul, Germany, Helvetia, and Italy. His feast day is 23 November. Colomban, after leaving Ireland, landed in Brittany, at Saint-Coulomb near Saint-Malo, in the 580s. Until 615, he evangelized France, Germany, Switzerland, Austria and Italy and created a monastery in Luxeuil. A European network of exchanges, bringing together hamlets and towns, was woven in the footsteps of St Colomban.

He never passed through Locminé, but the monks, who came from Luxeuil to create the convent, established his rule and his cult there. Saint Colomban is celebrated with a pardon at the end of June and his relics have been kept in the church since the 15th century.

The fountain St Colomban (17th), listed Historic Monument, also called the white fountain, was once the object of important pilgrimages. Its waters were reputed to cure madness and nervous diseases.