Modest in appearance, it houses an interesting statuary 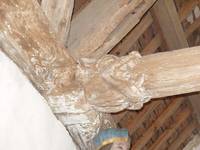 A humble hexagonal bell tower covered with slates, few openings, very sober moreover, in the middle of a simple schist construction... inside the whitewashed walls and a floor also in schist... it hides well its game! It has indeed preserved its engulfed entrails and the heads of blochets, but above all it shelters a remarkable statuary. 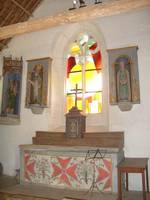 At the far left of the window is the statue of Our Lady of Flowers, which could date from the 15th century. The Virgin shows the baby Jesus opening a book. Following him, Saint Corentin in a cope with a mitre and a flowered crosier, the emblematic poison at his feet. On the other side, Saint Emerentian, supports with two hands her entrails which come out of her body disembowelled by her executioners. Saint Anthony, wrapped in a hooded mantle, undoubtedly presents the book of the monastic Rule.
In the choir, a majestic Saint Yves holds a parchment in his left hand. Opposite him, Saint Mark, recognizable by the little lion lying at his feet.
Near the wooden railing, the processional statue of N-D of Flowers is still a crowned virgin, with a blue mantle, with her child holding an open book. With her right hand, she presents a bouquet of flowers.
There are also two magnificent stained glass windows created by David Tremlett, following his visit to "Art in the Chapels" in 2008 and 2009. 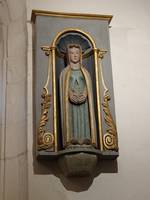 Even if the dedication of the chapel is indeed Our Lady of Flowers, it is St. Emerential, who was honored in this place. Indeed, very close to the village, the chapel was frequented by mothers who came to invoke the saint for children suffering from intestinal pain and to look for signs of their next healing. In the credenza was a piece of slate on which the young patient was seated: if the dampness of the body wet the stone, all hopes were permitted. If not, it was considered lost...

But these superstitious popular devotions were not the only ones... the clergy came to celebrate Mass and to celebrate forgiveness, still celebrated today on the fifth Sunday after Easter.

Art in the Chapels 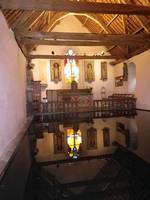 Open in July-August, N-D des Fleurs welcomes an artist every year as part of "Art in the chapels", a contemporary art exhibition on a circuit around the Blavet valley, bringing together around twenty chapels.

During art in the chapels", the chapel is open every day, except on Tuesdays from the beginning of July to Heritage Days. Outside this period, the key is to be asked at the neighbouring farm of Guénaël Raoul.